Zombies! Dinosaurs! Batman! So Much Awesome in Our July Pulls!

We’re back with another round of graphic novels to discuss for The Pullbox Podcast! You can choose to read any or all of these books to be a part of this podcast. Just head to your local library, book store, comic shop, Comixology, or find a friend with a copy that you can borrow, and start reading! Once you’ve finished reading, send us an email with your thoughts! Did you like the book? Why? What are your thoughts on the writing? The art? The characters? The premise? We’ll read one or two emails for each book on the Podcast; one of those emails could be yours! We will always lean toward the more thought-provoking emails that will allow us to carry on the conversation. The episode will be released on August 1. 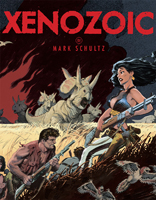 “What strange new world, to have such creatures in it!” Forced into hiding by a global ecological cataclysm, humans emerge from their underground warrens half a millennium later to discover that the Earth has been totally transformed. All of the familiar flora and fauna are gone, replaced by a radically altered natural order populated by rampaging dinosaurs and strange, new creatures. It takes guts, grim determination, ingenuity and a whole lot of old-fashioned luck just to survive, much less thrive, in this alien wilderness-all qualities that ace mechanic Jack Tenrec, lovely scientist Hannah Dundee and their friends possess in abundance. Xenozoic combines lush and richly realized ink-and-brush artwork with a pulp-fueled narrative to create an action-packed fantasy-an unrelenting adventure that also serves as a subtle cautionary fable concerning the unforeseen consequences that shortsighted present-day decisions might have upon future generations.

By Roberto Aguirre-Sacasa and Francesco Francavilla.

Available in paperback (ISBN: 978-1619889088) from Archie Comics and digitally through Amazon Kindle and Comixology. Also available as single issues Afterlife with Archie #1-5

When Jughead’s beloved pet Hot Dog is killed in a hit and run, Jughead turns to the only person he knows who can help bring back his furry best friend—Sabrina the Teenage Witch. Using dark, forbidden magic, Sabrina is successful and Hot Dog returns to the land of the living. But he’s not the same… and soon, the darkness he brings back with him from beyond the grave begins to spread, forcing Archie, Betty, Veronica and the gang to try to escape from Riverdale!

By Scott Snyder and Greg Capullo.

After a series of brutal murders rocks Gotham City, Batman begins to realize that perhaps these crimes go far deeper than appearances suggest. As the Caped Crusader begins to unravel this deadly mystery, he discovers a conspiracy going back to his youth and beyond to the origins of the city he’s sworn to protect. Could the Court of Owls, once thought to be nothing more than an urban legend, be behind the crime and corruption? Or is Bruce Wayne losing his grip on sanity and falling prey to the pressures of his war on crime? 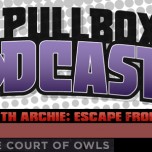