Who remembers Cliffhanger comics? We do! And that’s the subject of this month’s episode!  Michael and Kurtis discuss the first wave of Cliffhanger comics: Danger Girl, by J. Scott Campbell and Andy Hartnell; Crimson: Loyalty and Loss, by Brian Augustyn and Humberto Ramos; and our Reader Pull, Battle Chasers, by Joe Madureira. 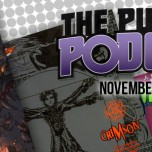