We’re back with another round of graphic novels to discuss for The Pullbox Podcast! You can choose to read any or all of these books to be a part of this podcast. Just head to your local library, book store, comic shop, Comixology, or find a friend with a copy that you can borrow, and start reading! Once you’ve finished reading, send us an email with your thoughts! Did you like the book? Why? What are your thoughts on the writing? The art? The characters? The premise? We’ll read one or two emails for each book on the Podcast; one of those emails could be yours! We will always lean toward the more thought-provoking emails that will allow us to carry on the conversation. The episode will be released on November 1.

Six years after the fall of the Empire in Return of the Jedi, the battle for the galaxy’s freedom rages on. The Empire has been mysteriously reborn under an unknown leader, wielding a new weapon of great power. Princess Leia and Han Solo struggle to hold together the New Republic while the galaxy’s savior, Luke Skywalker, fights an inner battle as he is drawn to the dark side, just as his father…

Kurtis’s Pull: IT’S A GOOD LIFE, IF YOU DON’T WEAKEN

While trying to understand his dissatisfaction with the present, Seth discovers the life and work of Kalo, a forgotten New Yorker cartoonist from the 1940s. But his obsession blinds him to the needs of his lover and the quiet desperation of his family. Wry self-reflection and moody colours characterize Seth’s style in this tale about learning lessons from nostalgia.

Reader Pull suggested by Tony Cliff who will also be a guest star in the recording of this episode! 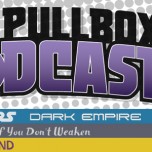