Mike and Kurtis discuss the latest installment of the Paul series by Michel Rabagliati – Paul Up North. Kurtis is a big Paul fan, but this is the first time Michael has read any of these books. How do their different perspectives colour their opinion?

Send us email! Suggest comics for us to check out! thepullboxpodcast@gmail.com 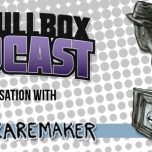