Kicking of Star Wars month with the first of three episodes talking about Marvel’s new Star Wars comics! In this episode Kurtis and Michael talk about the flagship title, Star Wars Vol. 1: Skywalker Strikes, and why it did not live up to their expectations. 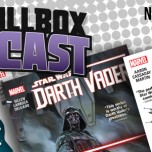