In this episode, Kurtis and Michael tackle the mature, experimental and often difficult themes in Pretty Deadly by Kelly Sue Deconnick and Emma Rios. Can they make sense of this book? 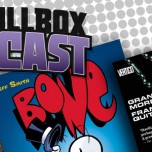