This month on The Pullbox Podcast, Kurtis and Michael go waaay back to the Golden Age of comic strips and also discuss a brand new graphic novel. Plus, comparing and contrasting the Winter Soldier movie and book: Sex Criminals: One Weird Trick, by Matt Fraction and Chip Zdarsky; The Complete Terry and the Pirates: 1934-1936, by Milton Caniff; and our Reader Pull, Captain America: Winter Soldier, by Ed Brubaker, Steve Epiting, et al. 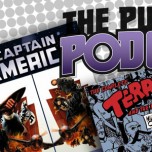