It’s time for another episode of The Pullbox Podcast! This month, Kurtis and Michael talk about three unique superhero books; Ex Machina: The First Hundred Years, by Brian K. Vaughn and Tony Harris, Battling Boy, by Paul Pope, and our Reader Pull, Astro City: Life in the Big City, by Kurt Busiek and Brent Anderson. 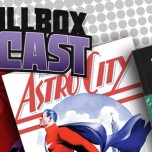