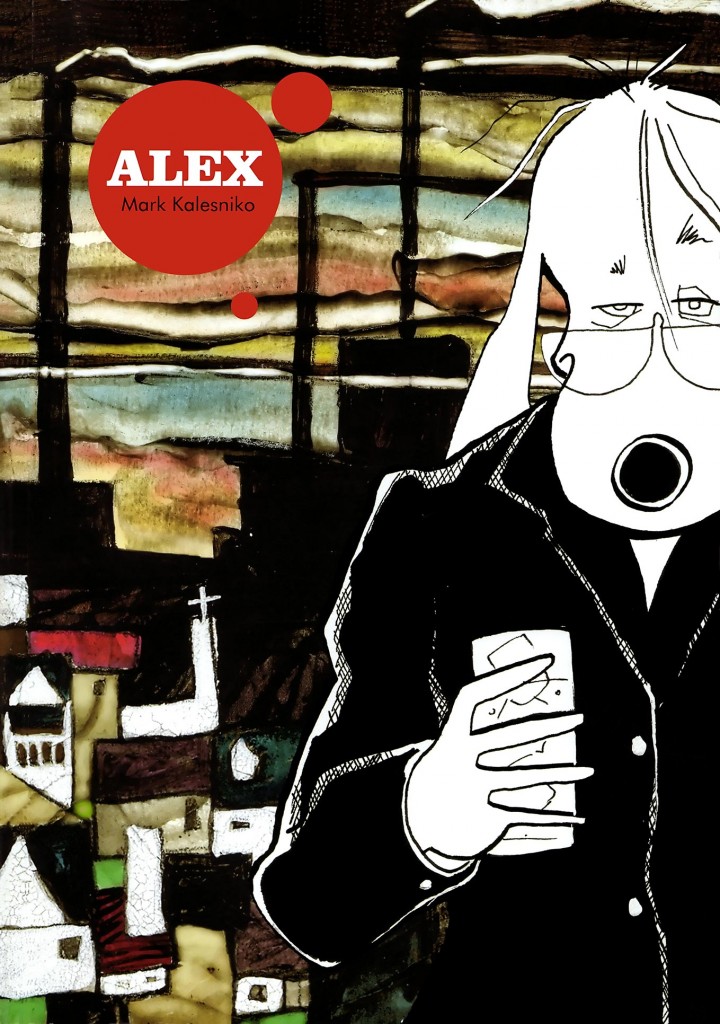 Alex Kalienka wakes up on a bench in a drunken stooper. Two men walk by as one regales the other with a story about eating his wife out. This more or less sets the stage for the tone and content of this book. That’s fair enough that the content is adult because the story speaks to an older generation, though might inform hopeful young 20-somethings as well. On of the key points of this story is Alex’s high school yearbook, which he was carrying around with him the night before, much to the surprise of his hung over self. As he stumbles home he also is surprised at a piece of art he created, a painting of the city scape, unlike anything he’s made before. He is an artist, but he specializes in cartoon bunnies.

Alex is a character crippled by fear of contact with the other people in his town and dreads it when he runs out of drink because that means it’s time to leave his house to get to the liquor store. It’s a burden he must carry given his friendship is limited to his old high school mate Jerome, who is still living with his mother perhaps for the sole purpose of being able to complain about her. Alex has a reputation around town, you see. When he was young, he aspired to be an animator for the legendary Mickey Walt Studios. (I wonder what they could be referring to…) He had dreams to leave the stale town in British Columbia and go down to California and make something of his life. He was going to chase his dream and make it, dammit!

Of course, what sets this story aside from other typical tales of regret is the fact that Alex did make it. He left his town and travelled to the States and got his dream job at Mickey Walt. And while we’re only given hints as to actually what happened down there, we know this: He made it and the dream wasn’t all it was cracked up to be. After years of work, he couldn’t take it and retreated back home. This is the tragedy of Alex. He was the success story of the town and upon his return, everything is basically the same except what is expected from him; stories of the dream life and true happiness found in his accomplishments. But he is more lonely than ever and crippled by alcoholism and social phobias. Yikes… could it be that our dreams are not the key to our happiness? The notion itself is crippling and we are to watch as Alex ties his self worth in with his accomplishments… which now seem so meaningless.

I wonder how much of this is autobiographical. It can’t be entirely coincidence that author and artist Mark Kalesniko and his creation Alex Kalienka have similar names, though I suspect that there is a great deal of exaggeration at least. And I’m pretty sure that Kalesniko doesn’t have a dog’s head, but then again there is no “about the author” blurb. If there was, it might very well say that he legitimately has a dog’s head, but I suspect Alex is drawn as such due to him identifying so much with his cartoon animals and his time at Mickey Walt studios. It is something he carries with him and something everyone sees in him, whether he wants them to or not. The fact that I suspect that some of this is very real is a testament to the writing, mixing enough realism and absurdity that some things seem stranger than fiction.

Kalesniko’s art is great. His characters are relatively simple in design, but very expressive; Alex most of all. The book is a brisk read because it’s not dialogue heavy. Alex communicates to the reader primarily through his expressions. Also, much of the charm is in his settings and backgrounds. He captures the run-down small town feel so well, again it seems too familiar to be completely fiction.

Alex offers a comedic, self-deprecating parody of real life and the all too familiar tale of ageing and redefining one’s self. Occasionally frustrating, but often endearing in its own strange sadistic manner. Alex, the character, through the outsider’s lens, is pathetic and hopeless, but the more we see of him, the more we understand his struggle and conflict. With our own demons haunting us, I suspect that readers will find themselves hoping for the best for Alex, that he may overcome his anxieties and find a reason to function again. I hoped so. Alex Kalienka has made appearances in future graphic novels and short comics, none of which I have read yet. But knowing that his story continues is encouraging and I am curious to see where he goes from here. 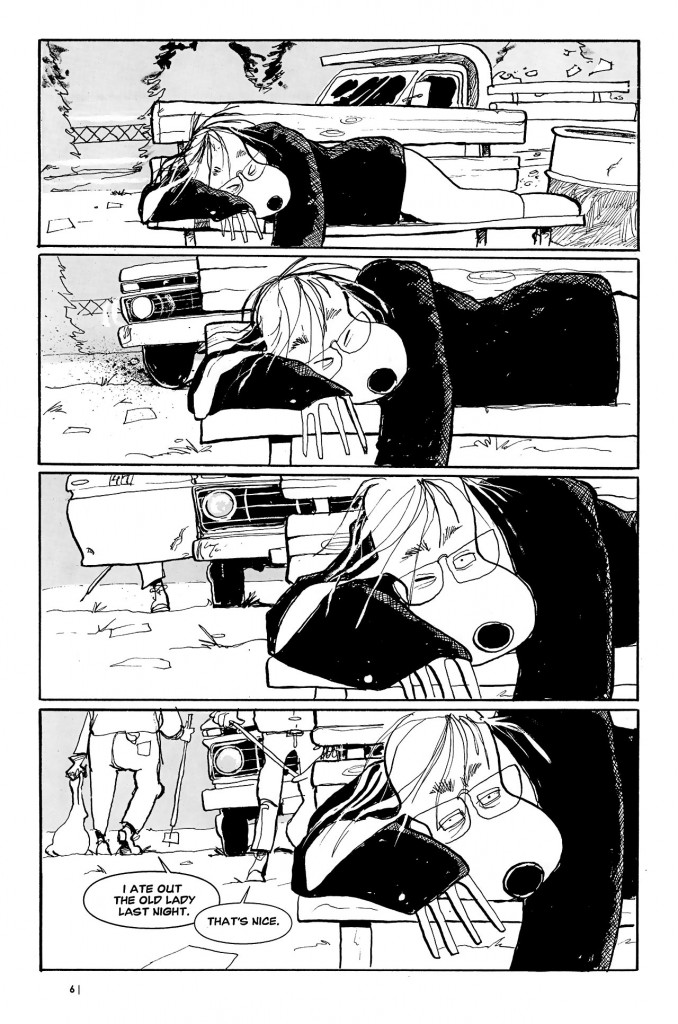 Doug grew up wanting to be Spider-Man, but settled for reading the comics and watching the cartoon instead. He always enjoyed reading comics, but followed his passion for performance and film making, hoping to make his first feature film in 2015. He is also the host of his soon to be launched podcast called Checking the Gate, as well as a co-host on the Music A to Z podcast. He fancies himself an entertainer and spends too much time in his own head pondering stories, philosophies, and the workings on his own mind. He also is known to make the best London Fog in Vancouver.