We’re back with another round of graphic novels to discuss for The Pullbox Podcast! You can choose to read any or all of these books to be a part of this podcast. Just head to your local library, book store, comic shop, Comixology, or find a friend with a copy that you can borrow, and start reading! Once you’ve finished reading, send us an email with your thoughts! Did you like the book? Why? What are your thoughts on the writing? The art? The characters? The premise? We’ll read one or two emails for each book on the Podcast; one of those emails could be yours! We will always lean toward the more thought-provoking emails that will allow us to carry on the conversation. The episode will be released on December 1.

By Brian Augustyn and Humberto Ramos.

The fateful bite of a vampire turns the world of teenaged Alex Elder upside down in this tale of loyalty and loss. As he adjusts to the terrors of undead society, Alex searches for nobility in the gothic underground of New York City. And in the back of his mind, he wonders whether he will ever be able to enjoy a normal life again.

Abbey Chase, an expert in rare antiquities and an adventuress of the highest caliber, is recruited by Deuce, leader of the ultra-secret spy group known as Danger Girl. Chase’s expertise is needed to assist in the recovery of several mystical artifacts coveted by agents of the sinister Hammer Syndicate, a fascist organization whose final objective is world domination. What part these artifacts play in the equation is unknown, but the Danger Girls will do whatever is necessary to find out. Abbey, accompanied by fellow team members Sydney Savage, Natalia Kassle and Silicon Valerie, along with brash secret agent Johnny Barracuda, navigates a trail fraught with intrigue, betrayal, deception, and, most of all, danger, as they strive to make the world a safer place. 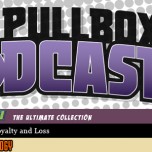