June Pulls! A Bunch of Classics!

By Kevin Smith and Joe Quesada.

When Marvel Knights took hold of this classic Marvel Comics character 10 years ago, the fledgling imprint redefined Daredevil for a new generation. In famed filmmaker Kevin Smith’s series debut, a scared teenager on the run places her baby in Matt Murdock’s hands. She claims her infant is humanity’s newborn savior, a true miracle child. Yet an elderly stranger soon confronts Murdock with some shockingly different news about this infant. While Daredevil attempts to separate fact from fiction, the deadly assassin Bullseye enters the fray, determined to capture the baby and leave the hero dead in the process!

Considered a cult classic (at least that’s what it says on the back cover) from the artist who went on to write and draw the highly praised Why I Hate Saturn, The Cowboy Wally Show consists of four chapters. “The Cowboy Wally Legend” is our introduction to this overblown mockery of a film star; “Sands of Blood” and “The Making of Hamlet” are two crazy attempts at film; and “Cowboy Wally’s Late Night Celebrity Showdown” is his final moment of television glory. This will appeal to fans of trashy television talk shows.

By Bill Willingham and Lan Medina.

Available in paperback (ISBN: 978-1401237554) from Vertigo Comics. Also available through Amazon Kindle and Comixology and in single issues as Fables #1-5.

When a savage creature known only as the Adversary conquered the fabled lands of legends and fairy tales, all of the infamous inhabitants of folklore were forced into exile. Disguised among the “mundys,” their name for normal citizens of modern-day New York, these magical characters created their own secret society that they call Fabletown. From their exclusive luxury apartment buildings on Manhattan’s Upper West Side, these creatures of legend must fight for their survival in the new world. 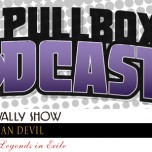