Kurtis has the opportunity to chat with Jason Shiga about his recent tour de force, Demon! Check out last week’s episode where Michael and Kurtis discuss the book, then come back here to talk to the creator! 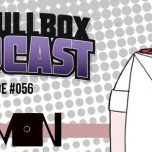