We’re back with another round of graphic novels to discuss for The Pullbox Podcast! You can choose to read any or all of these books to be a part of this podcast. Just head to your local library, book store, comic shop, Comixology, or find a friend with a copy that you can borrow, and start reading! Once you’ve finished reading, send us an email with your thoughts! Did you like the book? Why? What are your thoughts on the writing? The art? The characters? The premise? We’ll read one or two emails for each book on the Podcast; one of those emails could be yours! We will always lean toward the more thought-provoking emails that will allow us to carry on the conversation. The episode will be released on February 1.

Kamala Khan is an ordinary girl from Jersey City – until she is suddenly empowered with extraordinary gifts. But who truly is the all-new Ms. Marvel? Teenager? Muslim? Inhuman? Find out as she takes the Marvel Universe by storm! As Kamala discovers the dangers of her newfound powers, she unlocks a secret behind them as well. Is Kamala ready to wield these immense new gifts? Or will the weight of the legacy before her be too much to handle? Kamala has no idea either. But she’s comin’ for you, New York!

By John Wagner and Arthur Ranson.

The world didn’t seem to need a man like Harry Exton anymore. An ex-soldier and mercenary, Harry was a human-killing machine without a vocation, until an old colleague told him about ‘The Game’. The players, known as ‘Button Men’ are paid to fight to the death in a modern-day gladiatorial contest. Organised by mysterious backers known as ‘Voices’, the killing game offers bountiful financial rewards… if you live. Harry decides to participate, but soon discovers that death offers the only way out!

Reader Pull: GOTHAM CENTRAL, BOOK 1: IN THE LINE OF DUTY

Gotham City: a town teeming with corrupt cops, ruthless crime lords, petty thieves … and just a small handful that would oppose them. Grizzled veteran Harvey Bullock, Captain Maggie Sawyer, detective Renee Montoya and the GCPD are the law force that stands between order and complete anarchy.  Gotham’s Finest work around the clock to not only keep the world’s most psychotic criminals off the street… but also cleaning up the mess left behind by Batman’s one-man war on crime. 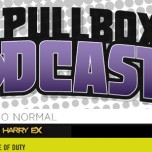