Happy Halloween! Michael is back and he and Kurtis discuss a spooky comic that is both creepy and hilarious at the same time! Jason Shiga’s Demon is a must read for the year! 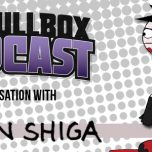