Review: Blue is the Warmest Color 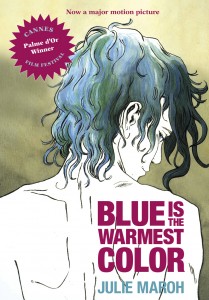 Blue is the Warmest Color has been making the rounds, getting high praise, in the independent film festival circuit (winning the Palme d’Or at Cannes). Since as it is an adaptation of a graphic novel it piqued my interest, but I wanted to read the book before seeing the film. So here is my review of the book which will not include any film comparisons because I haven’t see the film yet.

On the very first page we find out that the main character has died and that her story will be told through a series of journal entries that her partner is reading. You realize pretty quickly that this is a story about love. True love. The fairy tale kind of love in which two people are fated to be together no matter how they try to deny it. This is a love story told with passion, full of pain and heartache, and euphoria and bliss. Knowing that the main character dies by the end of the book only makes every happy moment happier; every painful moment even more painful.

Cleméntine is introduced to us as a teen in high school in the 90s who is just discovering boys when she passes by a girl with blue hair on the street one day. That chance encounter floods her mind and controls her thoughts over the coming weeks and months. Imagine her surprise when the two meet again and this time they talk. Emma, the blue haired girl, and Cleméntine begin a secret “friends with benefits” relationship, each for their own reason: Cleméntine because she is unable to accept that she is a lesbian but is in love with Emma, and Emma because she is in a broken relationship with another girl is using Cleméntine as an escape. The beauty of this story is that you think it is about Cleméntine, but it is just as much about Emma’s arc and how the two help each other discover themselves and how true love conquers all. This really is a fairy tale for the real world with a tragic ending.

Julie Maroh is a French artist whose debut work is this graphic novel. It was originally published in French in 2010 and took her five years to complete. Take a look at the art and you can see why. Her characters are full of life and jump right off the page. The world she shows us is real, dirty and beautiful. Her storytelling through images shows that she is already a master of the craft this early in her career. Take a look at the image I included below. The top right panel is split into two to show that Cleméntine isn’t just noticing Emma’s face, but rather her eyes and mouth in two separate thoughts. It is choices like this that make this a great comic rather than just an illustrated story.

Her colouring is also something to note. The present day scenes at the beginning and end of the book are in full colour, but the bulk of the book is a flashback and told in a black and white ink wash style with certain symbolic elements in blue. It is a striking effect, one that unfortunately isn’t reproduced in the film.

Blue is the Warmest Color will be a graphic novel to remember. It’s portrayal of gay people is quite progressive compared to other gay characters in comics. They aren’t über-feminist, butch women or effeminate men. They are ordinary people. This allows the central themes of love come though without distraction. Just as Alison Bechdel’s Dykes to Watch Out For used caricature and stereotypes to bring awareness of gay culture to pop culture in the 80s, Blue is the Warmest Color breaks down those stereotypes for a postmodern culture that is still trying to figure out where gay culture fits in. But ultimately, this is a story about love and you’ll still cry at the end of it. 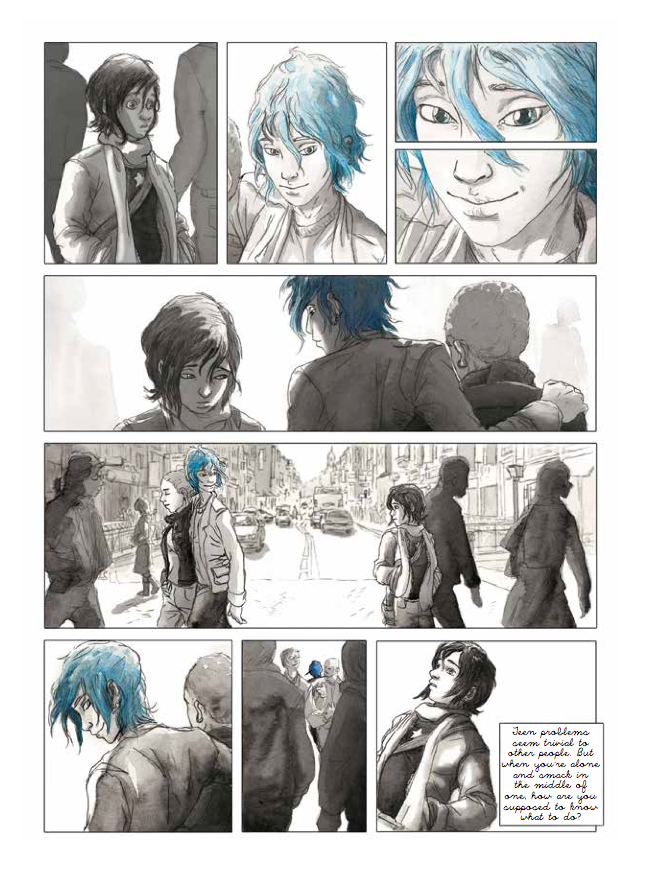